As LCD TV dominance comes to an end, we begin with the discontinued CRT and Plasma TV technologies.  All are relevant to understanding the TV. 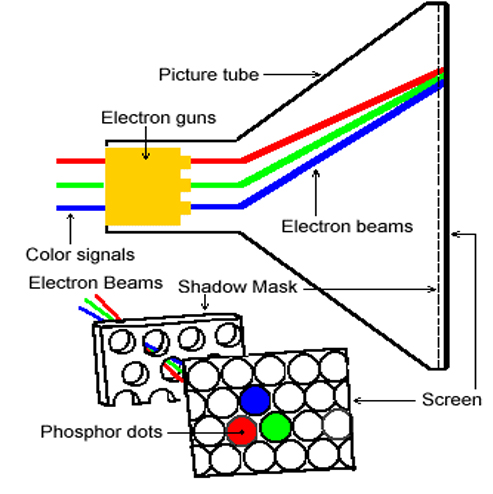 Modulating Electron Beams
The three modulating electron beams, guided by the electromagnetic coils, navigate the screen from left to right, top to bottom.  Each beam aligns with its assigned red, green, or blue vertical phosphor stripe located behind the shadow mask.  The shadow mask, a fine wire mesh of about 482 rows by 720 holes per row, allows the phosphorescent light to pass.  This framed array of passing-light creates illuminated pixels that recreate an image on the screen. 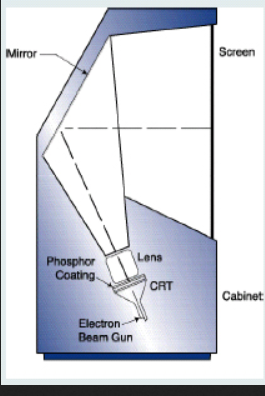 The rear projection CRT TV consisted of three small CRTs mounted at the bottom of a large enclosure.  They were generally about 5 to 7 inches in diameter.  Each had a dedicated red, green, or blue phosphor layer.

An assembly of a magnifying lens attached to each CRT.  Each assembly mated to its primary color voltage.  Each magnified image converged at a large-first-surface mirror at the rear of the enclosure.  The mirror redirected the magnified light through three front-mounted translucent screens. 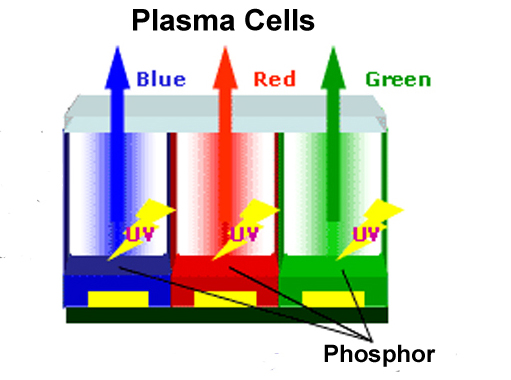 Handbook Note:
As explained on page 3, digital TV builds each video frame line by line.  Plasma, LCD, OLED, IOLED, LED TV video processors hold the lines of data until they have a complete frame.  They then flash the entire video frame to the screen.

Each pixel is a string of crystals suspended in a liquid.  A front crystal anchors the crystal string.  Like a row of dominoes, each following crystal stands parallel but slightly off-axis.  Each pixel string allows polarized light to pass until the crystal string begins to unwind and block light.

Front and rear glass plates sandwich the LCD array.  The rear-plate encases the TFT grid of electrical conducting points that align behind each LCD pixel string.  The electrical-conducting points control the amount of unwind. The voltage specified by the video decoder controls the conducting-point.  The picture is the array-sum of the illuminated red, green, and blue filtered pixels.

LED Back Lighting
LED backlighting consist of two types -- full-array and edge-lit.  Full-array is an array of LED blocks placed behind the panel.
Edge-lit installs LEDs around the edge of the TV panel.  A diffuser panel redistributes light across the entire diffuser panel. 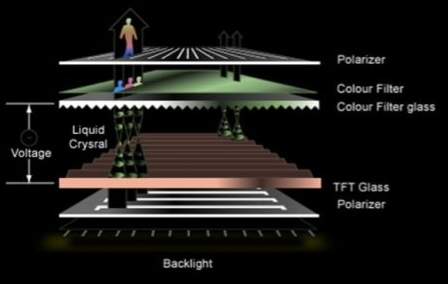 Quantum Dot Fix
LED backlighting does not produce accurate white light.  It leans toward the color blue, which distorts RGB color.  Quantum dot film -- placed between the LED lighting and the LCD layer -- fixes the problem.  Quantum dots are nanocrystals that illuminate when struck by LED light.  A mix of red and green Q-Dots plus blue LED light produces accurate white back-light that improves video color.
Mini-LED Back Lighting
A mini-LED is smaller than 0.2-millimeters.  It allows for more block-zones of LCD backlighting. As an example, a recent 65 inch LCD TV with more than 25,000 min-LEDs offered more than 1000 zones of backlighting.  To put this in perspective, a typical 75-inch full-array backlight LCD TV may have up to 500 zones. The increase in zones improves contrast and supports HDR formats.

Handbook Notes:
1. A min-LED is not a micro-LED.  Micro-LED is introduced later on this page.
2. Beware of advertising that obscures the term LCD in the description of an LED-back-lit LCD TV or a Quantum Dot back-lit filtered TV.  It is an attempt to imply that an LCD TV is an LED or a Quantum-Dot TV.  Real Q-Dot TV has not yet reached retail floors.  Currently, OLED, and soon IOLED plus Micro-LED, are the only real LED TVs on the market. 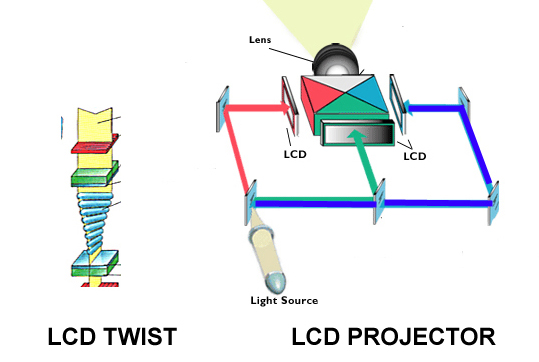 An LCD projector consists of a bright lamp targeted through polarizing mirrors that split and redirect the light with one path each to a red-filtered, green-filtered, and blue-filtered LCD mosaic chip.  Each mosaic passes or blocks light per its color video instruction.  The polarized mirror assembly recombines and projects the red, green, blue light through magnifying lenses to the projection screen.


DLP Projector
A digital light projector (DLP) features a Digital Micro-Mirror Device or DMD.  The DMD is an integrated chip comprised of a mosaic matrix of microscopic mirrored pixels. Each micro-mirror is mounted on a pivot and electrostatically tilted, plus or minus ten/twelve degrees. 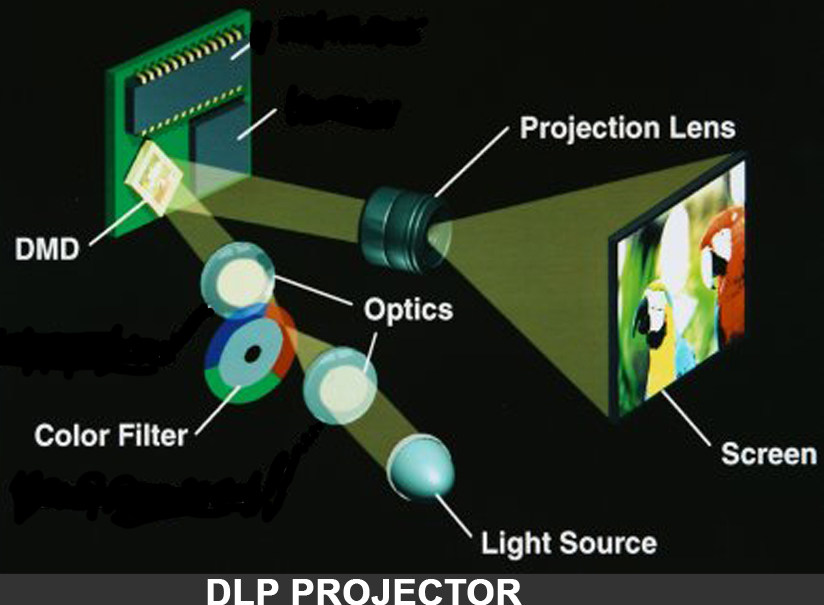 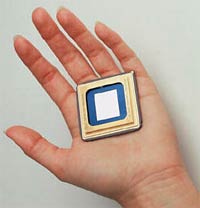 A DLP assembly begins with a bright lamp or laser light that creates a light beam directed through a spinning color wheel of red, green, and blue filters in route to the micro-mirrors of a single DMD chip.  The tilt of the mirrors reflects and directs the color light into an empty enclosed area within the projector or through a magnifying lens assembly on route to a projection screen. A video digital controller coordinates each mirror's tilt with the color wheel to recreate the correct mix and amplitude of red, green, blue light and recreates the original image.

A more costly version of the DLP projector engages three separate DMD chips and eliminates the color wheel.  As an LCD projector, the light targeted through polarizing mirrors splits into three beams.  Each beam directed through a red, green, or blue filtered DMD, and recombines, and projects to the screen.

LYCOS / DILA Projector
LYCOS and DILA projection TV is an LCD projector with a different polarizing twist.  It's a bit of DLP and LCD combined.  Similar to the LCD projector, the LYCOS/DILA projector includes a bright light, a polarizing beam splitting mirror, and three color-filtered LCD mosaics. 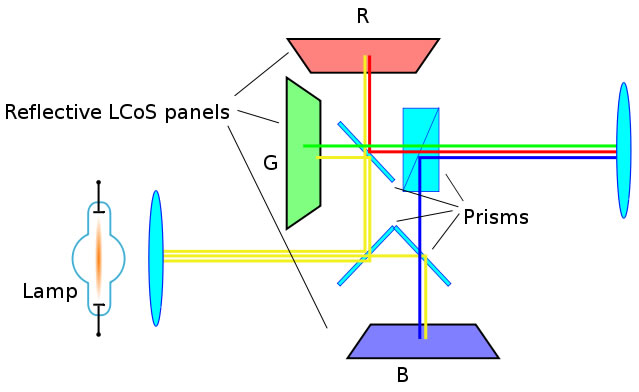