Movie frames include many aspect ratios -- screen width ÷ height.  Before 1953 the 1.33:1 (4:3) ratio dominated the silver screen.  Prompted by small 4:3 television screen competition, movie studios escalated the promotion of widescreen formats, which included the 1.85:1 ratio, the even wider Cinemascope anamorphic 2.35:1 ratio, and Panavision anamorphic 2.39:1 -- often referred to as 2.40

Widescreen 1.85:1
A widescreen 1.85:1 image was created by cropping a standard 1.37:1 film.  Cropping employed masking/covering the top/bottom of the theater projector lens.
The unmasked area created the image that filled the 1.85:1 theater screen.  But masking sacrificed the resolution of the forfeited surface of the 1.37:1 film.

Anamorphic Widescreen
2.35:1 Cinemascope and 2.39:1 Panavision use an anamorphic camera lens to squeeze a widescreen image within the 1.37:1 film frame.  A reversing anamorphic projector lens restores the 2.35:1 or 2.39:1 widescreen image on the theater screen.  The anamorphic process salvaged the film resolution lost in the 1.85:1 masking process.

Economic Success
Masking and anamorphic processing saved theaters and the studio money.  They accommodate each ratio with a single film size, a standard camera, a standard projector with interchangeable camera/projector lenses.

IMAX
IMAX theaters present their exclusive films in a 1.90:1 or 1.43:1 aspect ratio.
The IMAX aspect ratios are not included in the illustrations above.

UltraHD/HDTV
HDTV and UltraHDTV have an aspect ratio of 1.78:1 (16:9).
However, this screen ratio must accommodate a 100-year old library of different aspect ratios.
This accommodation included:
1. Place the original image ratio within the 16:9 screen.  Fill the unused screen with black or gray masking.
2. Stretch the image to fill the screen.
NTSC Anamorphic DVD
Anamorphic DVD squeezed widescreen images within the DVD 4:3 frame.
An anamorphic DVD was labeled as Enhanced for Widescreen or Enhanced for 16:9.
The DVD player's anamorphic software restored the full widescreen image on the HDTV screen. 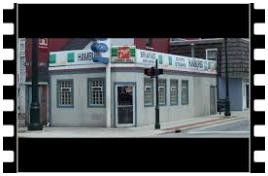 Anamorphic BlueRay?
The Blu-Ray disc has a 16:9 aspect ratio.
Blu-Ray does not have a 'fill-the-screen-option' for other aspect ratios.

My friend Steve maintained that everything makes a difference.  That includes aspect ratio.
Expert management of aspect ratio can add to a goose-bump generating experience.

Home theater projectors with large 90+ inch screens can manage aspect ratios with a 'constant-height processor' and vertical black-screen-masking.
A constant-height processor fills a DLP, LYCOS, DILA, LCD projector's 16:9 chip with a 2.35 or 2.40 image.  It squeezes the image laterally while maintaining its height.  An anamorphic lens slides over the projector's native lens to reverse the 'squeeze' and fill a 2.35:1 screen.

To make a difference, automate the lens slide and masking with the source aspect ratio.  The constant height with automated masking smoothly unfolds from 4:3 to 16:9, to 2.40 aspects ratios.  This 'unfold' method fulfills an impressive must-see-to-grasp goose-bump movie presentation.

The Land Of Forgotten Buzz-words.

This list of terms have lost or are losing their relevance.  Many were abused and used to confuse and mislead innocent consumers.
Yeah, it happens.  Review this list.  Then consider how a new slate of TV tech buzz-words will be used to confuse consumers from sea to shining sea.

LCD Blur & Judder
This issue plagues LCD HDTVs.  LCD motion that crawls in and out of focus is blur or judder.
Blur refers to slow LCD pixel response and constant-on back-light problems.
Judder is a movie (BluRay) 24fps versus LCD 30fps cadence misstep.

LCD 120Hz vs 240Hz Processing
LCD TVs address blur and judder with 120Hz and 240Hz processing.
Each process is available in an abundance of copyrighted names.
But each method includes more than a frame rate increase. 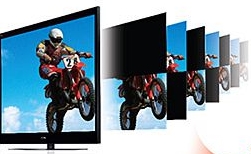 No Blur, No Judder, No More Plasma
Plasma TV is long gone.  Until OLED TV arrived, plasma was the better TV technology.  Its decisive advantage was a significantly lower black level, which delivered better contrast.  In addition, plasma did not suffer from blur or judder.  Plasma TV had no need for LCD 120Hz or 240Hz type processing
Plasma did offer 600Hz sub-field-drive and 2500Hz focused-field-drive.  Both were often incorrectly viewed as a version of LCD 120Hz and 240Hz processing.  Sub-field-drive and focus-field-drive had nothing to do with blur or judder.  Instead, both created tighter control of pixel-light emission.
600Hz sub-field-drive
600Hz sub-field-drive improved pixel clarity with up to 10 light-pulses per frame.  Each pixel ascended to full-lit amplitude in less than 1.67ms.
Put this in perspective, LCD response equals 4 to 12ms.

A sub-field is a single pulse period.
Each frame consists of 10 periods.  Pulses drove the illumination of plasma pixel phosphor.
Each period is pulsed or not-pulsed.  A pixel begins to illuminate with the 1st pulse. The total brightness is equal to the sum of the pulse-lit sub-fields.
This process offers thousands of shades of gray, which expanded the grayscale and color gamut.  As for the moniker 600Hz -- 10 sub-fields by 60fps
equals 600 sub-fields per second.  Hence 600Hz sub-field-drive.

2500Hz focus-field-drive
2500Hz focus-field-drive also drove brightness with pulses.  However, 2500Hz-ffd produced all of its light in the last 3 sub-fields.
That created a response time of only 0.4ms.  The faster window of illumination was much as shutter speed in photography.
Also, given the first 7 to 8 sub-fields were in an off-condition, contrast vastly improved.  The focus-field-result was a sharper, clearer image.
The 2500Hz moniker is derived by dividing 1 second (1000ms) by 0.4ms.