AV Physics
Did you hear that?

When waves crash on a beach, they transmit acoustical-energy in a spring-like motion through the air that arrives in the ear as sound.  The crashing waves cause air molecules to compress and then rarefact into neighboring molecules.  This cycle continues until the sound waves terminate in the ear or fade away. 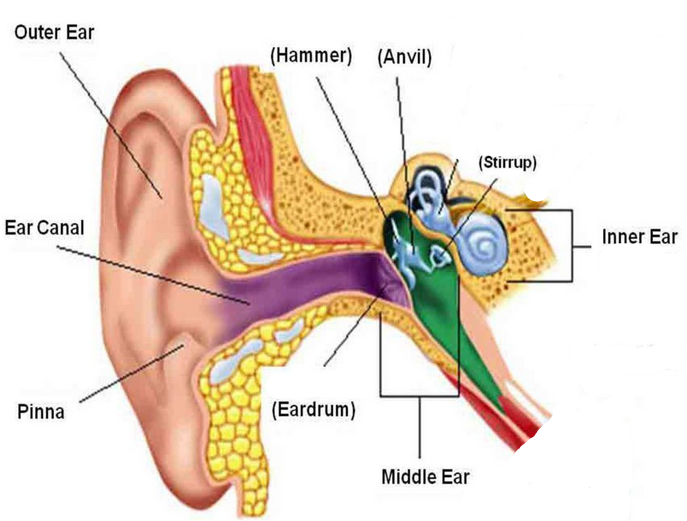 In route to the brain, the ear converts compression and rarefaction of air molecules into neuron discharges.
The compressions/rarefactions enter the pinna, the ear's directional encoder.  They then proceed into the
auditory canal, the ear's resonating acoustic amplifier.  At the exit of the auditory canal, the resonations beat on its membrane-acoustic barrier, the eardrum.

The resonating 'drum' mechanically links with the bone structure of the hammer, anvil, and stirrup of the middle ear's next boundary, the oval window of the inner ear.  All of this mechanical action activates the fluid sack of the inner ear, the final chamber. 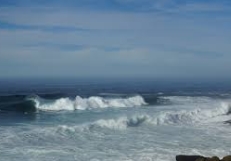 See the waves crash on the beach.

A surface, like water, absorbs much of the energy. The remainder reflects off the surface.  The reflected energy initiates another compression/rarefaction cycle that continues until it terminates in our eyes as a visible wave on the beach.

The eye converts electromagnetic light into neuron discharges.  Light enters the window of the eye -- the cornea and pupil.  The light then encounters the focusing lens of the eye.  It directs the light to the energy transfer point of the eye, the retina.  The retina consist of light-sensitive antennas called cones and rods.  The cones and rods stimulate the optic nerve that produced neuron discharges to the brain. 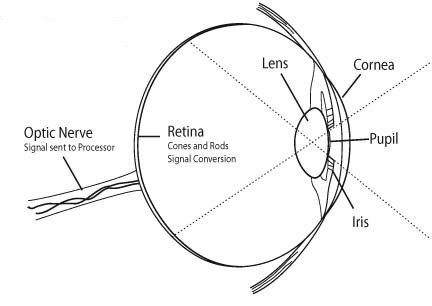 Review of the wave:

Frequency
Cycles per Second = Hertz = Hz
Frequency describes ...
the timber of sound,
the color of light,
or a radio broadcast frequency.

Wavelength
Wavelength =
Speed ÷ Frequency,
the distance traveled by one cycle of the wave.
Sound ranges from 56.5 ft to 0.0565 in
Light ranges from 440 nm to 770 nm
Radio ranges from a fraction of an inch to several hundred yards

Amplitude
Amplitude of the wave = power
Volume in decibels.
Brightness in lumens
Radio power in watts.

Subjective Intensity
Subjective power of the wave =
Loudness of sound,
Luminance of light.