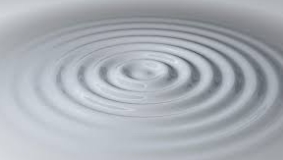 Sound is the compression and rarefaction of sound waves traveling through air.  Sources of sound compress (squeeze) air molecules, which then rarefact (expand).  The rarefaction compresses adjoining molecules, which rarefact-compress adjacent molecules.  The cycle continues until it terminates in the ear or fades into the atmosphere.  It is the cycle of sound.
Handbook Note:
Hertz (Hz) = cycles per second.
One thousand = one Kilo or K
Mega, meg, or M = one million
KHz = one thousand Hertz
MHz = one million Hertz

Lines on an O-scope

Audio engineers translate sound into measurable illuminated lines on the screen of an oscilloscope.  The o-scope modulating lines illustrate the wavelength, amplitude, and frequency of a sound wave.   The oscilloscope reveals a ten-octave frequency range of sound that spans from 20Hz to 20KHz.  The area of 20Hz to about 500Hz covers bass and rhythm frequencies.  The core of the human voice and instruments occupies the region of approximately 500Hz to 2KHz.  The balance generates vocal detail and ringing-reverberating sound.
Handbook Note:
The speed of sound = 1130 ft/second

The amplitude or objective volume measurement of sound is the decibel (db), a logarithmic unit of sound pressure.  It is a scale that extends from 0db to 194db.   Sound engineers employ a logarithmic scale because of the immense range of human ear.  It spans from the threshold of hearing to beyond the level of pain.  The threshold of hearing is the level created by a molecule of air landing on the surface of the eardrum.  You read that right.  The pain threshold is at about the sound pressure level of a large aircraft during takeoff at close range -- 120db.

In the 1930s, Bell Labs researchers Fletcher and Munson observed that the subjective response of the human ear differed from the objective measurement of sound pressure level.  They determined that the human ear is most sensitive to the range of 1KHz to 5KHz.  Frequencies above and below must be increased in volume to perceive as equal volume.  The effect becomes more prominent as the volume decreases.  The effect diminishes as volume increases.  Fletcher and Munson defined this subjective or psycho-acoustical response to sound as loudness.

Handbook Notes:
- A doubling of loudness =
about 9 to 10 db change in sound pressure level.

- A doubling of amplified power =
an increase of about 3db.

Sound can also travel through other media such as water, wood, steel, etc., but sound cannot travel through a vacuum such as the vacuum of outer space.