An Acoustical Strategy
for the small room

The 4 acoustical regions of the small room

The 'Master Handbook of Acoustics' offers a strategy that divides the small room into four regions, each matched to a dedicated mix of tactics to cope with acoustical-distortion.  The follow augments their tactics with well-known acoustical-principles plus practical solutions garnered from my colleagues over four decades.

The 1st region consists of wavelengths that are longer than the primary mode of the longest room dimension: > 565 ÷ L.  This region is not affected by small room acoustics.  Some mistakenly believe that this region establishes the lowest frequency a room can reproduce.  That is not true.  In this region, the room dimensions do not impart any resonant support or affect.

Acoustical tactic for the 1st region
Leave this region alone.

The 2nd region consists of wavelengths shorter than the primary axial mode of the longest dimension but longer than 1.9 feet, the wavelength of 300Hz.

F1 represents the primary axial mode of each opposite room boundary -- height, width, length.
The wavelengths of F1 are equal to 1/2 the speed of sound divided by its dimension.

The three primary axial modes and their harmonics produce peaks and nulls, acoustical swells, throughout the small room.

-- F1 peaks at its opposite boundaries;
but nulls at the mid-point of the room dimension.

-- F3 peaks at its opposite boundaries, the mid-point and 1/4 and 3/4 points of the dimension;
but nulls at the mid-point between each peak.

-- F(x) This peak/null 'swell' behavior continues with each succeeding harmonic.

Adjacent modes primaries + harmonics
From approximately 565÷L to 300Hz, adjacent modes [ of all 3 primaries and their harmonics] with a coincidence or large spacing create distorting peaks and nulls which create deviations from flat frequency response.  Coincidences create peaks, while large spacing creates dips or nulls.
-- A coincidence equals a difference between modes of 5Hz or less.
-- Large spacing between modes equals approximately 20Hz or more
Above 300Hz their influence is minimal. 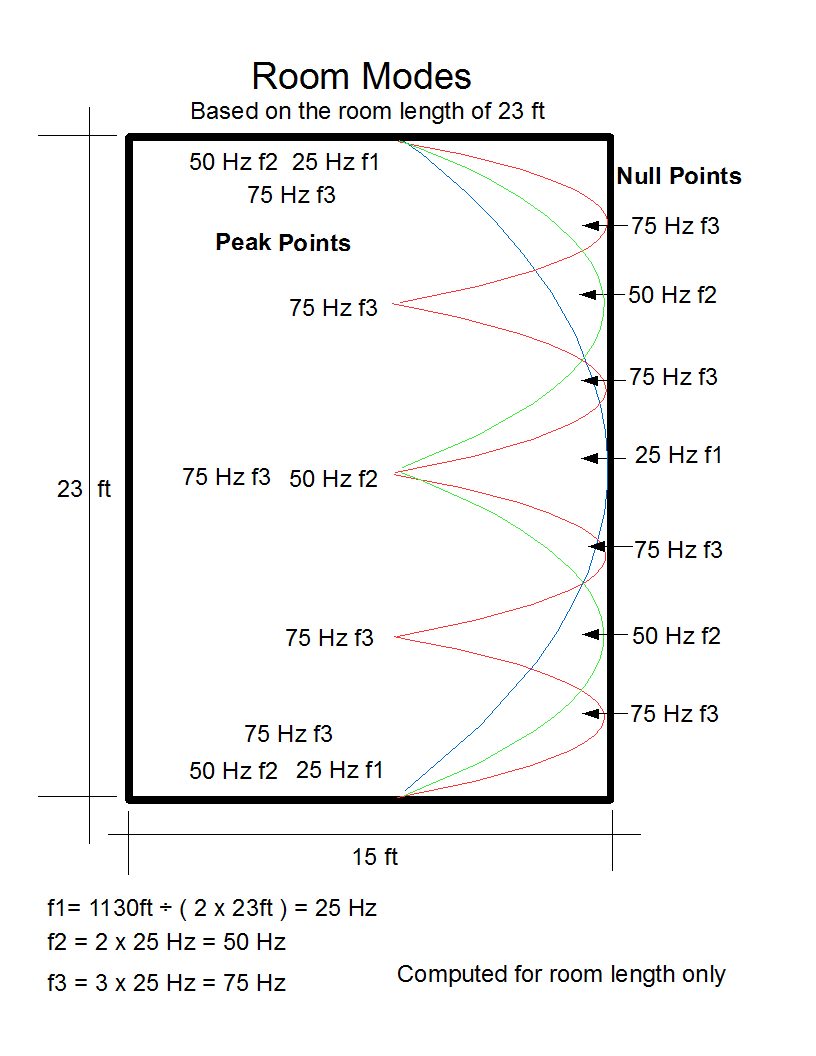 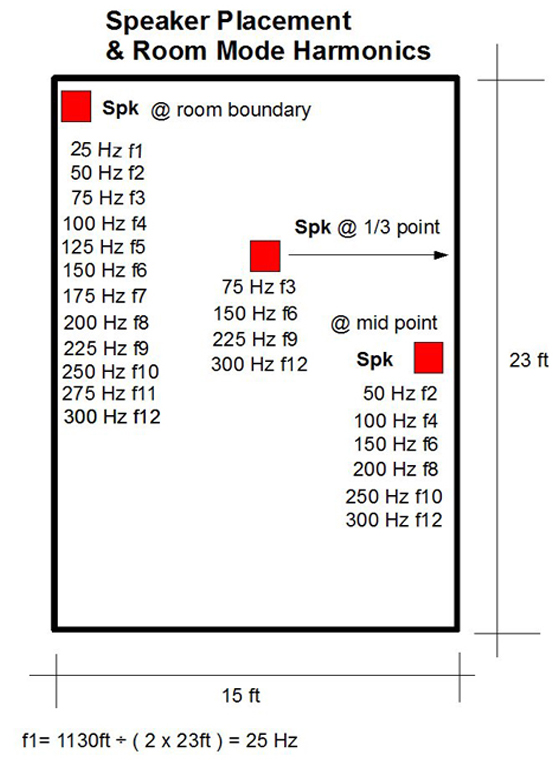 I have avoided tangential and oblique modes, a wave bouncing off more than two opposite boundaries.  Their amplitude is a great deal weaker than primary-modes.  Fortunately, tangential and oblique modes typically fill-in nulls between the more widely spaced primary modes and their harmonics.  Therefore, for this 'small room' discussion, we will assume that their disruptive effect is negligible.