A friend commented that he appreciated the surround sound descriptions and speaker layouts outlined below.  But he still did not clearly understand surround sound.  And he asked, why are there so many format acronyms?  My attempt at explanation began with the use of stereo audio in a movie theater.

Stereo audio can be effective if a viewer sits in a theater seat near or beyond the stereo sweet spot location.  If they sat closer plus well left or right of the sweet spot as they viewed an actor screen center, they heard their voice emanating from the edge of the screen.  This can be disorienting.

Dolby Labs popularized a solution, a surround sound format that radiates the sound of screen images from their screen location.  They direct the sound of screen-left images to a left-placed speaker, screen-right images to a right speaker, and centered-images to a center speaker.  Plus, as the name implies, they installed rear channel speakers that allow for surrounding enveloping effects.  Star-ships fly front to back, left to right, diagonally, and circularly around the theater.  The addition of a dedicated low-frequency effects channel rocks theater audiences with exploding concussive sound.

Dolby Pro Logic adds the movie theater center channel, the sub-woofer channel, and modifies the left and right front channels to set the left/right audio edges of the image.  The rear-channel is as Dolby Surround.  The following details the logic used to create Pro Logic Surround Sound via a Dolby Labs integrated chip. 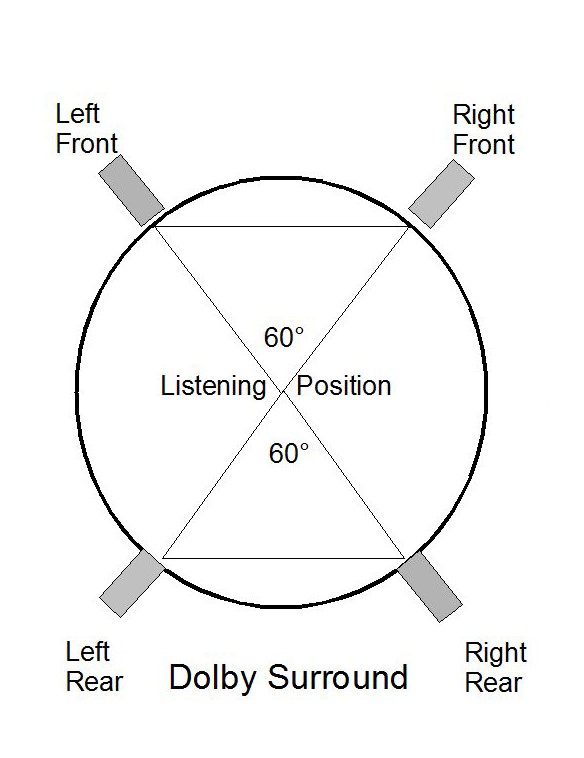 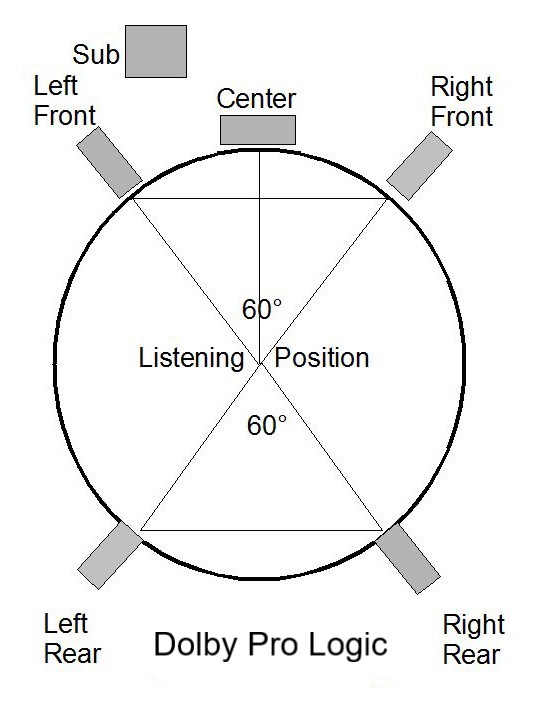 Digital Surround Sound eliminates difference matrix processing.  Each audio channel is recorded as a discrete channel and routed to a dedicated speaker.
The DVD, the BluRay disc, and Internet streaming employ the Dolby and DTS digital formats.  Broadcast satellite, cable, off-air ATSC, and soon ATSC 3.0 NextGen TV use Dolby formats.  Dolby Digital and DTS are available in the following versions.

Dolby 6.1 provides a 6th discrete, or matrix-derived from a 5.1 mix, center rear channel.

Dolby 7.1 duplicates the 6.1 rear center channel and routes it to another rear placed seventh speaker.

DTS employs the same layouts as Dolby.  The difference -- Dolby protects small home theater center speakers by limiting center channel dynamics with the complementary limiting of the front left and right channels.  DTS does not.  Therefore, DTS has the potential to generate more dynamic playback.  Also, many point out that Dolby compresses 5.1 digital audio to 640kbit/sec, while DTS supports a higher bit rate of 1.5Mb/sec.  Higher bit rate may extend the DTS advantage. 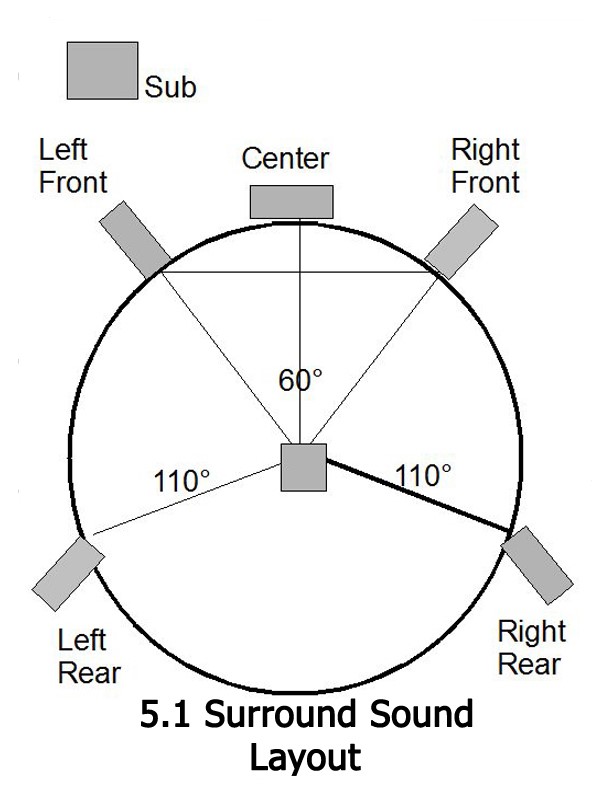 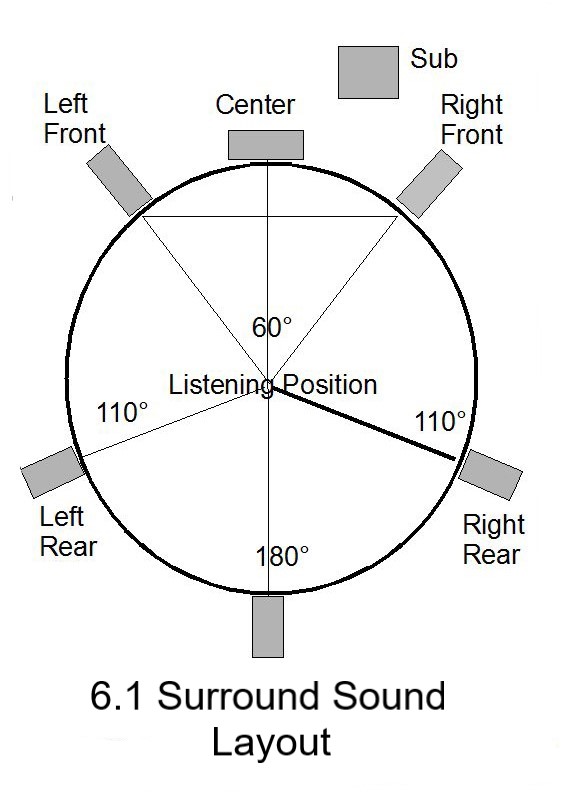 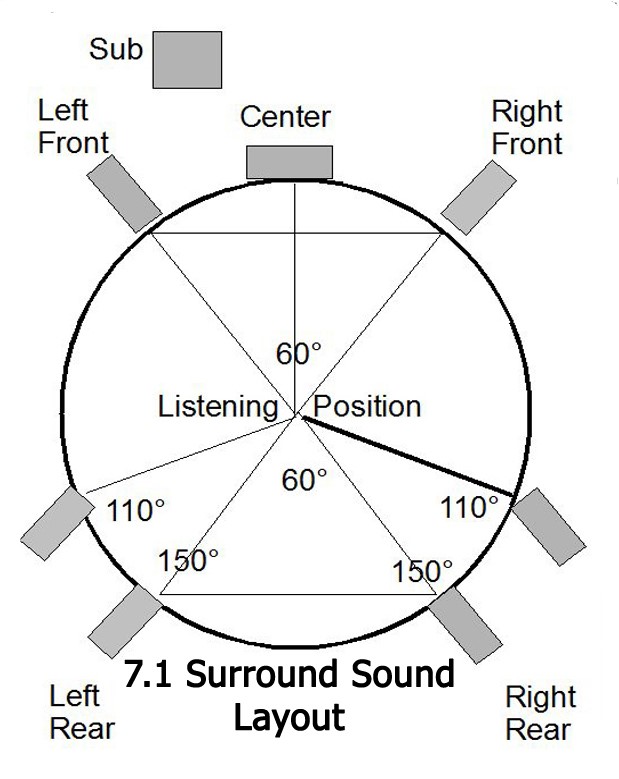 Multi-channel and the Blu-ray Disc

Immersive surround from above 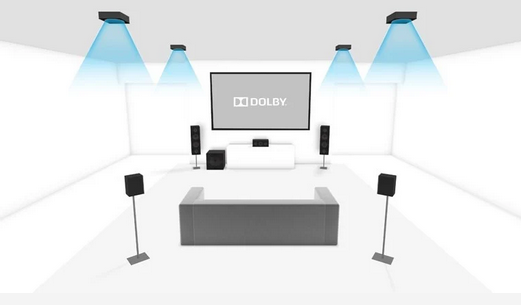 2014 Dolby Atmos adds two or four overhead 'height channels' to the home theater 5.1, 6.1, and 7.1 layouts.
The Atmos process works via an 'object-oriented' effect.  Digital 'tags' are assigned to film objects in the sound mix directed to specific speakers.

2015 DTS:X introduced the object-oriented tags and above channels.